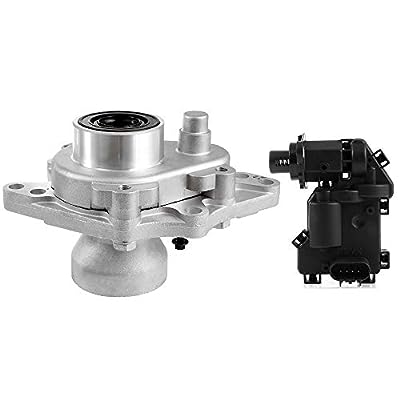 Price: $131.57
As of 2020-10-19 19:08:40 UTC (more info)
Product prices and availability are accurate as of 2020-10-19 19:08:40 UTC and are subject to change. Any price and availability information displayed on https://www.amazon.com/ at the time of purchase will apply to the purchase of this product.
Availability: In Stock
Click and Choose Options
Buy Now from Amazon
In Stock.
Product Information (more info)
CERTAIN CONTENT THAT APPEARS ON THIS SITE COMES FROM AMAZON SERVICES LLC. THIS CONTENT IS PROVIDED 'AS IS' AND IS SUBJECT TO CHANGE OR REMOVAL AT ANY TIME.

?FITMENT?: 4WD Axle Disconnect Housing Assembly 2003 2004 2005 2006 2007 2008 Isuzu Ascend ?DIRECT REPLACE?: SCITOO Axle actuator housings are complete assemblies, you can replace the whole actuator housing without worrying about reconstructing the parts inside (which were likely damaged anyway). ?PLACEMENT?: It resides on the passenger side of the oil pan, opposite of the front differential. The disconnect allows the front left and right wheels to spin independently of each other, and allows the front prop-shaft to remain still while in 2WD mode ?ADVANTAGE?: SCITOO Axle actuator housings helps to prevent the front differential and prop-shaft seals from wearing, and theoretically reduces the rolling resistance of the drive train to improve the fuel mileage ?REPLACE YOU PART PROMPTLY?:If your axle actuator isn’t working, you won’t be able to lock the front axles together causing a very ineffective 4WD system and causing power to be transmitted to only two or possibly three wheels. Replace you part in time!